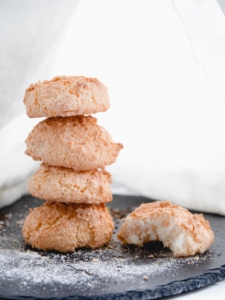 I wanted to make my new Brazilian son (aka exchange student) feel at home here in the US, so I decided to look for a recipe for something native to his home country. I was quickly drawn to a coconut dessert recipe on the internet called Cocadas. I chose a recipe with a bit of lemon zest in it, as I thought that would be yummy, plus it was translated into English, so that made it quite a bit easier for me to read, since I only know English. Although the original recipe didn’t call for egg white, the mix appeared very dry and I didn’t see how it would hold together without a binder. So, I searched some more on the internet and most recipes called for sweetened condensed milk, and some for egg whites. I had already added regular milk and I didn’t want it to be too soupy, so I opted to add one beaten egg white and see what happens. I am glad I did! These sweets turned out just right with a refreshing hint of lemon. Now that I have looked further into the matter, it seems that Cocadas are actually coconut macaroons, and the Barefoot Contessa had a YouTube video on how to make them. On her video, she actually beat her egg white until stiff, and she used sweetened condensed milk, too. She also added vanilla, and I may try her recipe next, but I think I will end up sticking with the lemon zest because these are just so tasty! However, I will try scooping them onto a baking sheet lined with parchment paper and see how that works.

Preheat oven to 390ºF. Line mini muffin tins with paper liners. In a medium sized mixing bowl, mix together flour, salt and baking powder. Add coconut and lemon zest; mix well. Add the milk and egg white; stir until it starts sticking together. With a small cookie scoop or a teaspoon and knife, fill muffin tins. I was able to fill 18 tins. Bake for 15 minutes or until golden brown. Enjoy!

*I used regular sweetened shredded coconut from the grocery store and ran it through my electric grater (Salad Shooter) to make it more fine. I used more like 2 1/2 cups, because it was more condensed once it was shredded finer.